The companion styles tasks progress and we reach a good point for a résúme of the current status.

We have two main tickets running to cover enhancement styles for the WP themes Twentyfifteen & Twentyfourteen. Last week we committed the initial pass for twentyfourteen’s scss file and compiled CS & rtl CSS files. A further round of updates and styling have been committed to twentyfourteen to bring it to a par with twentyfifteen’s current state of play.

Both sets of files now provide the two themes with styles that are designed to provide additional enhancement supporting the BuddyPress default stylesheet, with the aim of ensuring that BP displays at it’s best and that any particular requirements that the themes have are catered for in these additional stylesheets.

So we achieve our primary goal if we can have an almost seamless rendering of BP elements in one of these given themes, where BP just blends in naturally looking as though it belongs in that theme. Our secondary goal would be to then tweak BP elements to have a little extra sparkle and would be the icing on the cake so to speak.

Our primary aim is pretty much achieved, yes there are still aspects that could take attention and yes doubtless we will find issues to address, but these tasks are less about themeing every aspect as about ensuring a broad sweep on elements to ensure the majority of critical issues are addressed, but overall BP renders in a far more seamless manner now in these themes, with for example twentyfifteen now producing a pleasing experience when we activate BP.

Although the tasks here were always about harmonizing with the theme rather than ‘design’ there are two aspects to both tasks where what may be described as ‘design considerations’ were undertaken, both of these are up for criticism and review.

Both twentyfourteen & fifteen have what is best described as narrow content widths best used for rendering blog or magazine style posts, this sort of narrow text width container doesn’t suit BP components which need to display quite a bit of detail on pages, thus where BP renders it’s screens we have manipulated those widths to effectively create new layout pages for wider content, while attempting to maintain a relationship with the themes concepts for layout containers. 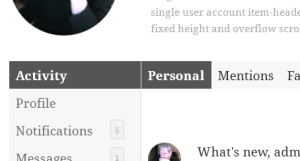 Horizontal navigation has long been an issue where dynamic nav elements are concerned of an unknown quantity, thus for both themes and for the User acount and single groups we have re-factored thse navs so that the primary object nav runs vertically to the left – opinions and thoughts are sought on this, whether this works, or do people prefer the older style horizontal navs?

At this stage feedback and/or suggestions are welcomed on these two tasks. it would be great if core dev team and all community members that can run local dev installs could switch to using twentyfifteen/twentyfourteen in their day to day dev work and note any issues that they may spot in passing, these can be fed back to the respective tickets 2015 | 2014 or even left as comments to this bpdevel post.

We would also be hugely interested in anyone that has any thoughts on styling specific elements of the BP components e.g the various tables in user accounts, activity stream comment display etc. Again comment feedback or even code if people want to tackle a section and provide a patch via the SCSS file or if not comfortable with SCSS simply work up styles in, say the bottom of the .css version and upload that to the trac ticket and we’ll check it over and if necessary work it into the SCSS file.