Unfortunately, the meeting started 30 mins later than scheduled, so we were not able to talk about all the scheduled points. @johnjamesjacoby congratulated the great work the team has accomplished during the 7.0 development cycle and the recent updates we’ve published on the BuddyPress.org’s blog.

The call for tickets is now closed (it ended on January 13), the least we can say is it didn’t gather much wishes 😬. @im4th seems to be motivated to progress on the BP Attachments’ front, 8.0.0 might be a good milestone to have some user media feature included into BuddyPress core.

@slaffik shared his concerns about introducing the Activity scheduling feature (#7953). He thinks it should be handled by a BuddyPress plugin rather than be included into Core.

He and @im4th agreed on the fact we should deprecate the BuddyBar into this development cycle (#7729). @rayisme ‘s patch was very close to make it during the 6.0.0 release, let’s have it done!

We then talked about continuous integration and build tools. The Travis CI (.org) shutting down announcement with no specific date is concerning. @im4th has tested the Travis CI (.com) migration with 2 of his free and open source plugins and is now requested to pay for the service after a bunch of builds done. The documentation about the migration seems to be a bit misleading about this subject. @slaffik is going to work on moving to GitHub Actions (#8421) 😍 . He also opened a ticket to modernize our composer.json file (#8420). He and @im4th are thinking we should start working on WP Code Standards (#7228).

Let’s carry on talking about 8.0.0 during our next dev-chat: it will happen on January 20 at 19:00 UTC and of course in #BuddyPress. If you have ideas or questions, feel free (and we are strongly encouraging you) to comment this summary to share them!

We also spent some time investigating a possible bug about Activity recorded dates but it turned out it wasn’t involving the plugin. We’ve decided to package a minor release (7.1.0) before christmas. It should be available for download later today (around 21:00 UTC).

About the 8.0.0 features wishlist!

We’ll post a new call for tickets at the very beggining of 2021, the same way we did it for the 7.0.0 release. Everyone will be welcome to contribute to it. You can start looking for Trac tickets you’d like to see fixed for 8.0.0.

@slaffik will personally take a look at good-first-issue tasks, on those that he has created a while ago, and will open a new ticket to work on bringing Twenty Twenty One compatibility improvements to our default Template Pack 👍.

Finally and more globally about development cycles, we’ll have a discussion about how we can improve things such has release regularity, release leading, etc.

It will happen next year on January 6 at 19:00 UTC and of course in #BuddyPress. If you have ideas or questions, feel free (and we are strongly encouraging you) to comment this summary to share them!

Many thanks to all BuddyPress contributors for their help during 2020, we wish you all great holidays and to stay safe. See you in 2021 for some great BuddyPress times!

Apologies for not posting updates here lately. This is a compilation of all the dev chats for January 4, 11, 18, 25, and February 1 plus relevant activities.

BP Email: Allow end user to specify which PHPMailer should be used (#7286). @djpaul has committed patch to trunk.

Alphabetical sorting in the group widget (#7313). @dcavins has committed patch to trunk.

Use BP_Groups_Group::get() where possible (#7419). @dcavins has committed patch to trunk.

Notice: Trying to get property of non-object (#7329). @r-a-y has committed patch to trunk.

XProfile: a group’s first field becomes last after save (#7428). @offereins has committed patch to trunk.

WordCamp Miami hosts BuddyCamp for the 6th time and this year, expect a REST API workshop along with interesting BuddyPress topics in this single full-day event.

WordCamp Miami 2017 will be held over the course of three days, March 24-26, at Florida International University. 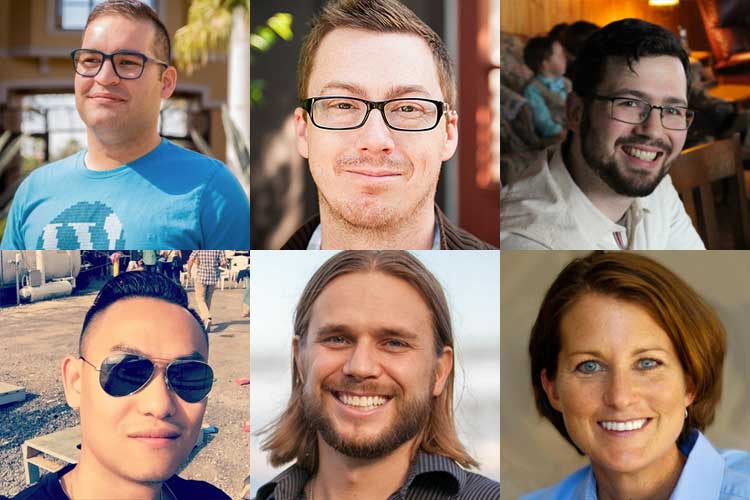 Add a “buddypress” class to body element of wp-admin (#7353) @slaffik has committed fix to trunk.

@slaffik will be contacting everyone who volunteered to maintain BP components in Trac.

@dcavins would like notifications from Trac for new tickets under the Group components. He mentioned different workarounds like getting Slack notifications for the Groups component to getting the RSS feed from Trac for the specific component. @johnjamesjacoby: “We’d need to merge into our Trac what’s already in WordPress Trac. That’s probably Dion and/or Nacin.” @netweb noted after the chat that there’s a ticket in Meta Trac to get this underway.

Some more enhancement for translators (#5784) @slaffik recommended to close the ticket.

PHP Fatal error: Uncaught Error: Call to a member function get_do_autolink() on null (#7337) @slaffik has patch. @djpaulgibbs noted that patch should extend beyond preventing fatal errors to making the function usable outside the template loop.

Uninstall button and routine (#2755) This ticket would have to be put on hold until decisions are made on routines and details required to export/copy then delete/drop BP DB tables and other options.

@slaffik has been reviewing old tickets, closing some, adding others to 2.8, and “providing feedback where I see fit.” A friendly reminder to core devs to review tickets marked with `2nd-opinion`⁠⁠⁠⁠ and `⁠⁠⁠⁠dev-feedback`.

Welcome to our New Committers!

Congratulations to @slaffik and @netweb and @offereins for getting commit access! We all look forward to working with you in making BuddyPress greater than ever 🙂

Banners for the BuddyPress 2016 Survey

@johnjamesjacoby has added banners linking to the BuddyPress 2016 Survey at https://buddypress.org and https://codex.buddypress.org The survey will run through November 30, 2016.

All the BuddyPress development takes place in Trac. All the tickets, most of the feature discussions and confirmed bugs, are all managed via Trac. For better tickets management, we use milestones, components, keywords and other ways to categorize everything. So far we have 24 components:

WordPress (as well as some other OSS) uses an interesting approach where a person or a group of people are responsible for a specific component of a software project. The contributors have a specific interest in their chosen component, and enjoy or see the need to focus most of their contribution time on it.

In the long run, this helps that contributor quickly triage tickets in their preferred component, as they specialize in it and build up a knowledge advantage. The overall project benefits by faster review and prioritisation of new tickets.

I propose to implement BuddyPress component maintainers, with the hope that this will help move development even further and faster.

Some components, like Activity, Extended Profile, and Groups, need special love, as the number of tickets there is 50+. These components will benefit from having multiple component maintainers assigned to them.

Component maintainers don’t need to do anything special – just consider reviewing Trac tickets for your component, when you have a will and time to contribute to BuddyPress. You will be expected to look through all existing tickets, as well as new ones, provide feedback and help the larger project prioritise bug fixes and new features.

If you have any thoughts about this, or want to volunteer to become a component maintainer – please write in comments. And remember, it’s good to have several people per component, so join in even if you see someone’s mentioned your favorite component!

@slaffik proposed the following actions to address the 654+ tickets in the Future Release milestone:
1) Go through tickets with 2nd-opinion and dev-feedback – and reply, close, or consider working on it.
2) Go through tickets that were updated years ago – and consider them to be closed by default, but read and investigate the value. If a ticket has been left for a long time in Trac, it’s either not that important, a duplicate, hard, or forgotten.

@johnjamesjacoby noted, “Proper organization, along with timely responses, I think are more important, but I agree that keeping it tidy reduces the cognitive burden of ‘holy moly there are 500 things to do.'”

The survey for Theme/Plugin Developers and Site Builders will be running through November 30, 2016. https://buddypress.org/2016/11/2016-buddypress-survey-site-builders-developers/

These are a few of our favorite things and suggestions for this dev cycle:

Improve BP Navigation from @im4th. @boonebgorges has started work on ticket last week refreshing the `BP_Nav` ideas. He will “dive into it after WP 4.4 comes out.”

Update Member home page to match new functionality of Group home page from @hnla. Can start off with user’s own `front.php` template and expand on top of this later.

BP Emails from @djpaulgibbs. This involves “architectural improvements to emails, and customizable emails. (#6592)

xProfiledata_meta from @boonebgorges.  Fix the way xProfile field visibility is stored (move from usermeta to xProfiledata_meta), which will make the data schema saner and also allow us to fix some search-related bugs.

Improved caps from @im4th. Currently doing it in his template pack project.

Hashtags from @jconti. @slaffik noted that there are two BP-compatible hashtag plugins in WP repo. Chat continued on whether hashtags will be used for search vs. auto-completing hashtags or both.  @rayisme has worked on a fork of etiviti’s older hashtags plugin, will require at least some form of unicode support. He will be working on “Better compatibility when using ‘BP_ENABLE_USERNAME_COMPATIBILITY_MODE’ and UTF-8” which would also support emoji hashtags mentioned by @djpaulgibbs.

developer.buddypress.org from @mercime. @djpaulgibbs noted the logistics required and testing will be needed before deployment. @boonebgorges mentioned some devs expect projects with stable APIs to have web-based documentation generated even when they are already big fans of the inline documentation.

Add “semi-private group” from @mercime. @boonebgorges pointed out that there were a couple tickets about separating the various parts of group status into standalone bits, so that you could make custom group types  like visibility vs join/invite vs who-can-invite etc. A version of “semi-private” would be some combination of these things. (#6094)

Bulk mentions for Groups from @jconti.  Feature is akin to Slack’s @ {here} {channel} {etc}. @djpaulgibbs noted that “the complexity there is around updating the notifications and probably a per-group setting to turn that on/off, when I rewrote the auto-suggest lookup stuff about a year ago, I had it in mind to be able to support group mentions, so there’s some work done already. @im4th brought up concern about notifications (emails) if a group has 200,000 members.

Reactions instead of favorites, dream from @im4th.  @boonebgorges replied with “A dream: BuddyPress Relationship Table and API.”  @djpaulgibbs: both ideas fill me with memories of many hours spent on those, I have like a quarter-done github branch somewhere porting Posts2Posts over if anyone’s really really keen. “

There are more features, bug fixes, and enhancements not mentioned above that already have tickets in Trac and some that will have tickets soon. Join the fun in making this dev cycle another awesome one for the community!

Trac Tickets for the 2.5.0 milestone are available on this page.

You can keep track of the tasks for the 2.3.0 milestone on this page.